Symphony Housing Group describe themselves as the largest registered social landlord based solely in the North West. With over 41,000 properties, we operate across 30 local authorities and we are committed to supporting the regeneration and sustainability of the North West.

I have sent Bronwen Rapley, Group Chief Executive an email asking what plans Symphony has for this site. I have reproduced that email below.   As soon as i get a response I will of course ensure local residents and the wider community are informed.

As you will be aware a planning application, APP/14/00706 for the Demolition of The Millhouse public house and erection of 38 residential apartments for older people (over 55s) and other associated development including hard and soft landscaping, boundary treatment, car parking, and alterations to access from Millhouse Lane.( amended proposals, reducing number of units, increasing car parking and alterations to elevations) was refused unanimously by Wirral’s Planning Committee on the 22nd October, 2014, however the application was subsequently allowed at appeal.

Since the appeal was allowed by the planning inspectorate in 2015 the site has been left to deteriorate and has become an eyesore to local residents, a real blot on the landscape, and indeed, until it was tidied and fenced off was a magnet for fly tipping and anti-social behaviour.

As one of the three Ward Councillors for the area, along with local residents we are keen to see this site redeveloped and brought back into use as soon as possible.

I would very much appreciate it if you could tell me if it is Symphony’s intention to build in line with the current approved planning permission, or do you have other plans for this site?

I look forward to your response

Over the last few days there has been an exchange of emails between myself and Darren Leary of Galliford Try, (reproduced below) who are the owners of the Millhose Pub site.

The site has been neglected over the months and has become a real eyesore.    Hopefully the promises made by Mr Leary regarding tidying the site and securing it will come to fruition.    Time will tell

Galliford Try is currently in the process of arranging to remove the fly tipping and erecting some further security measures with a view to restricting access to the site. This will be done in the next 7 days. Vegetation will also be trimmed back in the near future.

I am aware that my colleagues and local residents have contacted you regarding the appalling state of this site, which has become a magnet for fly tippers and all kinds of trouble.

Having seen many emails I am also aware that you have chosen to lay the blame for the lack of development and the subsequent condition of the site on local Councillors, who supported local residents in opposing the planning application. Before you deny that please read this direct quote from one of your emails. The scheme was refused only once by local councillors at Committee influenced by some fairly spurious statements by one local member in particular.

Regardless of that, the maintenance, protection and upkeep of this site is the sole responsibility of Galliford Try, a multi-billion £ company that boasts revenues of £2.3billion. Yet for reasons clearly best known to yourself you appear to want to leave this site, located in a densely populated residential area on a main thoroughfare in a forlorn and unkempt state, is this to punish local residents for having the audacity to object to your original planning application?

On behalf of local residents I request that you stop delaying and take immediate action to clean up this site, remove the fly tipping, cut back the vegetation and maintain to an acceptable standard until such time that you have a development ready to be started, and or you sell the land to another individual or company.

Myself, my colleagues and local residents do not believe that this is too much to ask. I have attached photographs taken by me this morning that are representative of the condition of this site.

I look forward, to hopefully, a positive response

Readers of the blog and the wider Moreton community will be aware of the appeal made by Vodafone for a telephone mast, cabinet and ancillary equipment on Town Meadow Lane (near the the Linear Park Childrens Play Area).    The application was originally refused by Wirral’s Planners back in April and Vodafone left it until two days before the expiry before they appealed.

Since then I am aware that many local residents have sent in letters objecting, and thanks to John and Julie (two residents who live close by) a huge petition of over 450 signatures has been collected and submitted to the planning inspectorate.      Its not too late to object, but be quick, you have until the 8th December to get your objection to the Inspector, and don’t forget it has to be in triplicate.    For more information click HERE

Residents of the Millhouse estate and part of the Lingham estate will be aware that earlier this year, at my request, Merseytravel commissioned Mott Macdonald to carry out a consultation to see what people in the community thought about the introduction of a new railway station ‘Town Meadow’

Initially Mott Macdonald did a letter drop to some 2,000 homes and this was followed up by a door to door survey across 400 homes.    I am delighted that their report has now been finalised and can be published.

The Headlines of the report are:

You can read their full suvey findings by clicking HERE

I think this survey really strengthens the views that this station is ling overdue.    It will be interesting to see what ‘Spin’ Merseytravel Officers put on the covering report that will be sent to Rail Services Committee.   Watch this space

Earlier this evening, along with colleagues, Cllr Steve Williams and Cllr Simon Mountney we attended the follow up public meeting to discuss road safety issues, and particularly speeding traffic in Millhouse Lane.

The meeting was arranged to hear the results of the Councils investigations following a meeting in May.     David Rees, the Council’s Group Leader for Road Safety explained to those present the results of the two traffic surveys, and the investigations surrounding the two accidents to the house in Tanworth Grove at the junction with Millhouse Lane.

It was interesting to note that whilst traffic movement in Millhouse Lane has increased by 4.5% since the last survey in 2003, traffic speeds have reduced from an average of 35mph to 32,6mph, with an overall reduction of traffic travelling above 30mph from 48% down to 23.7%,  a step in the right direction.

In order to try to reduce traffic speed even further, and improve road safety the Council will be installing ‘Centre Line’ markings from the Millhouse Pub to Tanworth Grove, providing ‘Slow Signage’ on the carriageway and junction markings on some of the side roads.   You can see the plans by clicking HERE.    Engineers have also promised to review the situation in about 12 months.       Me, Steve and Simon will also look to provide a ‘Vehicle Activated Speed Device’ next year with funds from are Area Forum’s Integrated Transport Block.

Our thanks go to all those residents who signed the petition, those who attended the two public meetings and those who wrote, emailed and telephoned us with their views.      This is a real example of a community coming together to deal with an issue that affects them all.

Just a short reminder that there is a public meeting tonight at the Millhouse Pub, starting at 6:30pm to discuss road safety and traffic speeds in Millhouse Lane.   I and my colleagues, Cllr Steve Williams and Cllr Simon Mountney will be there, along with a representative from Merseyside Police, and the Councils Road Safety Manager, David Rees.    If you have any concerns about road safety in this area then please come along.  We hope to see many people there tonight.

A reminder that on Tuesday 17th  August at the Millhouse Pub, commencing at 6:30pm there will be a public meeting to talk about road safety in Millhouse Lane.     I, along with my colleagues, Cllr Steve Williams and Cllr Simon Mountney hope to see lots of people in attendance. 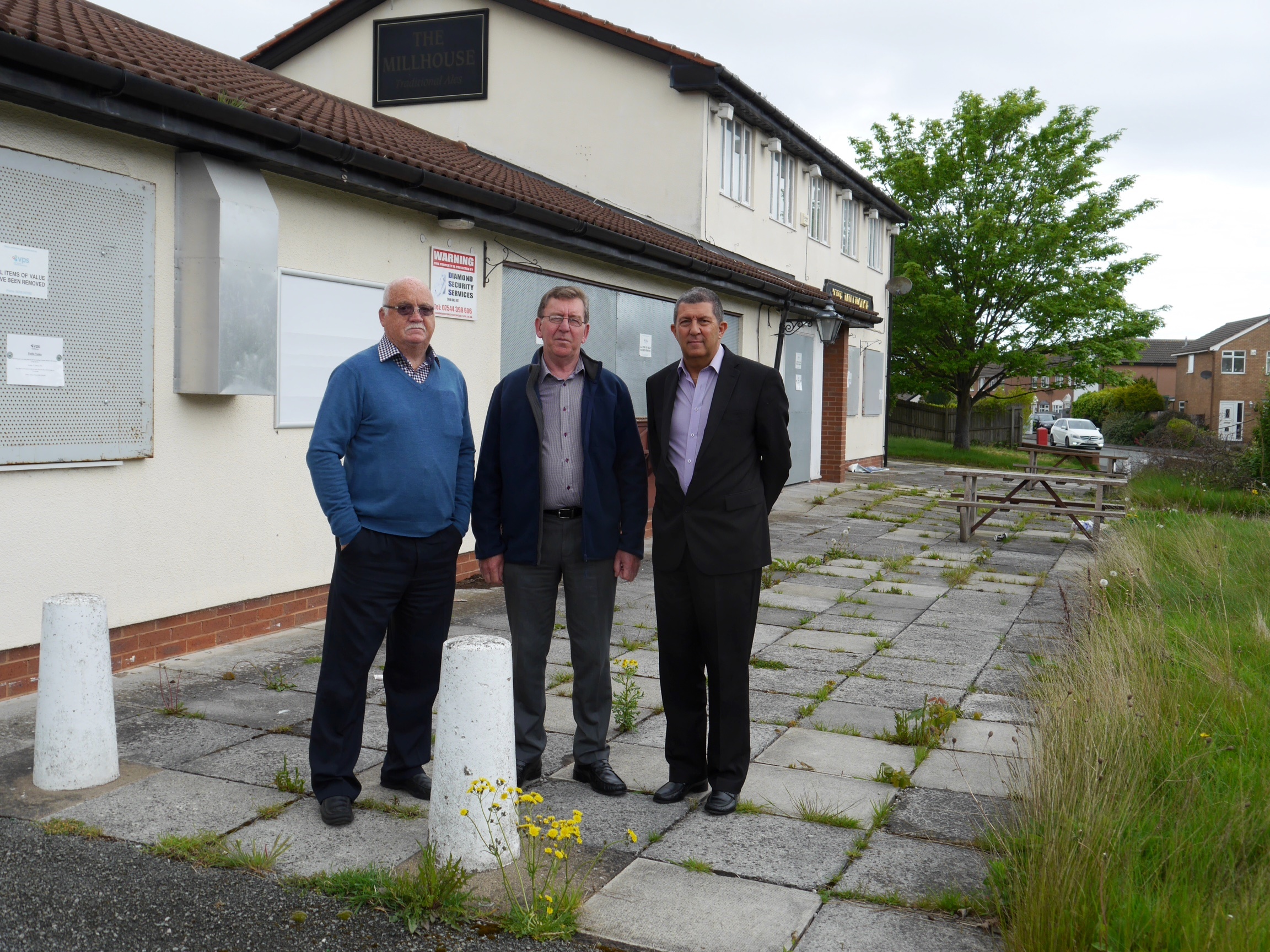